Project that shouldn't have been a project...

I think we all have had these.  It started out as something simple, beautiful, and thoughtful.  Then, by some force of nature accident stupidity, it became a bit more frustrating, complicated, and labor intensive.

You see, I made a wonderful choice when we had Mike's family Christmas gift exchange.  His niece, Julie, had created one of those cool collages where natural things become letters which spell out some meaningful word and I was the lucky selector in our Dirty Santa game.  The great news is - nobody stole it away from me and I got to bring it home!  Yippee!!!

It is the cutest thing and she was so crafty.  I'm not sure where she found the lettering but she did and printed it out to fit into 4 x 6" pictures. 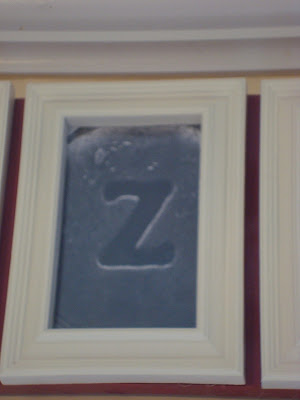 I wonder if this Z is off some concrete sign.

I think she got inexpensive frames and painted them (or she could have found the simple frames all the same color - I'm not sure.) in a creamy white.  She got a board and painted it red.  After she placed the letters into the frames, she simply glued them onto the board and had instant art.  I just love it. 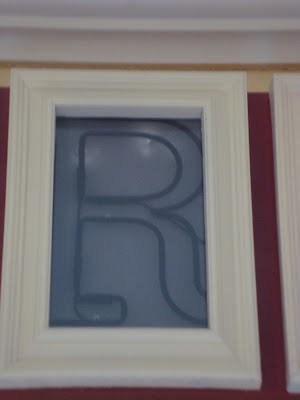 This R is a piece of neon signage.

Well, I was excited to get this treasure in our gift swap.  I brought it home and leaned it against the wall till I could decide where I wanted to hang it.  Finally, I decided that this was what the space above the French doors leading onto the back porch had been screaming out a need for.  (I've wanted something to hang there ever since I painted the kitchen.)  So, I tested it out by getting my trusty little step ladder and holding it up to make sure it would fit.  Perfect!  It was almost as if she had made it expressly for that space.

So, I leaned it up against the table and went back to stir whatever I had on the stove in my dinner preparations.  Shortly after, Mike came in the back door.  The dog ran to greet him.  He closed the door, the floor was jarred a bit.  The earth moved.  Something happened and the artwork tipped over and crashed to the floor.  I do mean crashed!  Two of the cute little frames were knocked off the board.  The piece of glass in one of the frames broke into shards.  I was so mad...at myself for being so stupid as to leave the artwork precariously leaning there.

So, the next day, I had to find one of my old cheap Goodwill frames and steal the glass from it and replace the broken glass and glue the frames back in place before I could hang it in the space it was made expressly to decorate.

And that is how a project became a project when it shouldn't have been a project at all.
Posted by Beverly Noland Ozburn at 11:02 AM