Somebodies in our family have become entrepreneurs... 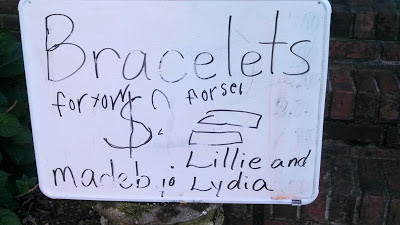 Signage
On a couple of recent afternoon phone calls, I learned all about business..from my six-year-old granddaughter.

Her mother informed me that the two girls, Lillie (6) and Lydia (4) had crafted some bracelets using pipe cleaners and beads.  They had made some using patt-er-uns (pronounced just like her mother and uncle used to say).  I asked to speak to the head of the corporation and Lillie was given the phone.

She informed me that they had lotses of bracelets for sale.  One bracelet costs one dollar.  Their store was set up on the front porch.  "We wanted to put it in the yard down next to the road but MAMA (meanest mother in the world was inferred here)  wouldn't let us."

"We have a sign down by the road but people just keep on driving by.  Isn't that just RUDE?"

I asked her to pick out two which would match the kind of clothes she has seen me wear.  I was told, "You can only get one bracelet for a dollar."  So, I had to convince her that I would cough up two dollars in order to get two bracelets.

So, being the thoughtful grandmother that I am (living a bit more than an hour away), I suggested that the little entrepreneur give my sister (Aunt Brenda) and 'the girls' (her daughters) a call and ask them to come driving by to check out the new business.  I also suggested that she ring up MawMaw (her other grandmother).  Lillie thought this was a grand idea and handed the phone back to her mother with this instruction, "Please talk quick, Mama.  I need to make some calls."

Evidently a few choice calls were made.  One went out to her mother's friend who works nearby.  The friend couldn't come by the new store that day but promised to buy a few when she could on Tuesday.  Bridgette shared this information with the head of the corporation and learned, "But Mama, there won't be a sale on next Tuesday."

Aunt Brenda and the girls came with money in hand and didn't rudely drive by.  They stopped and shopped and bought treasures.  They were also informed that each bracelet costs a dollar.

A bit later, MawMaw cruised down the street and wasn't rude either.  She stopped and did some OOOHing and AAHHHing.  Then, she asked how much a bracelet cost.  To which the little entrepreneur quickly responded, "three dollars," without batting an eye.  I told Bridgette that she certainly knows her clientele!  We grandmothers will pay anything won't we? 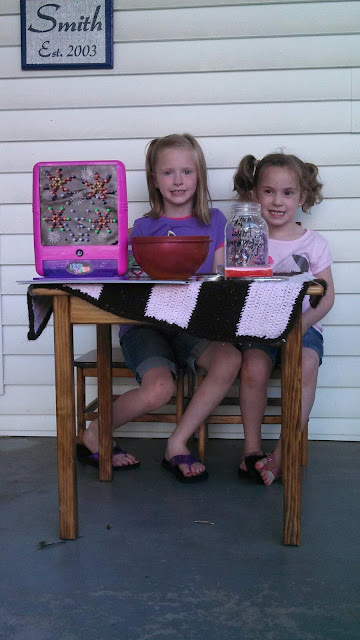 Small business in action - but not near the street!
Posted by Beverly Noland Ozburn at 1:57 PM