Merry Christmas from the Farm!

I posted a little Christmas greeting over on my professional blog today.  Hop on over there to see it!

Teaching and Learning Out of the Blue

That is about the only way you are going to see snow around here!  Rain, mud, and sloshiness abound but Mike and I have been out in T-shirt sleeves for the past couple of days.

Mike ground up a batch of sausage and got another batch ready to grind yesterday.  Last night we sacked up twenty pounds to meet the requests for today.  Then, when we were getting ready for bed (about midnight), I stood at the sink drinking a glass of water and noticed a calf stroll out the front door of the barn.  So, we jumped into our boots and sloshed out through the rain water and mud to get him hemmed up in a pen. 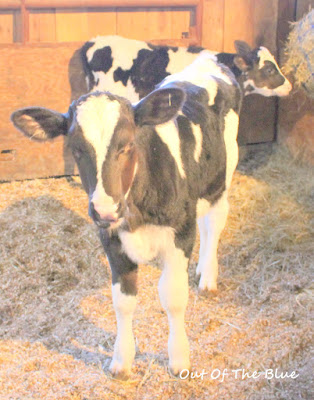 This is just a sampling of some of Mike's spoiled babies.

Those darn calves are so spoiled.  They will come right up to Mike and will follow him most anywhere with a bucket.  He pets and rubs on them and they are just like big old puppy dogs at times.  Not last night, of course.  This fellow would follow me with the bucket for a bit.  Then, he would turn around and run back to stand by his friends who were watching the proceedings just across the fence.  After two or three circlings of this game, Mike decided he would get the friends into the upper barn (Pop's Barn).  So, he drove up the hill, taking a bucket with a bit of grain in it and called the fellows up there.  Worked like a charm, they all jogged up there to him - even the fellow on the wrong side of the fence.  Mike opened the gate and the errant fellow went into the lot fairly easily. 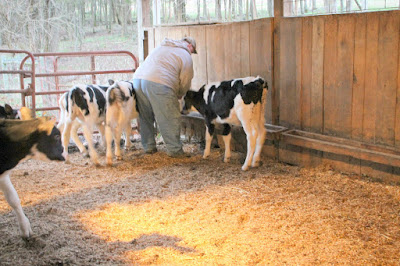 Even though these are some of the little fellows, the yearlings, who reach Mike's shoulders, also crowd round him when he takes a bucket into their area.

Mike decided to pen up all that group of yearlings until he could find where there was a hole or a tree bending the fence down.  So, he began a trek over to the gate.  Well, those guys began to follow him because he was carrying that bucket.  Mike had to lead them back to the trough and feed them the few bites of grain to distract them in order to get the gate closed. 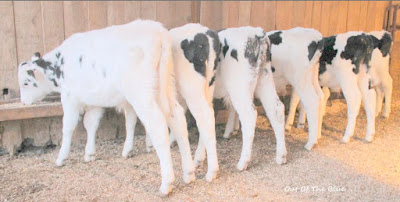 By the time we got back to the house, neither of us was in a frame of mind for relaxing and sleeping.  Plus, we were sweating like we had been trying to herd cows on foot.  Imagine that!