Spiffed-Up for the Season

Before we usher the new year in, I thought I might share what our house looked like spiffed-up for Christmas.  I didn't really do as much decorating as I have done in the past.  I kept it simple and I think that made it much nicer - at least for my level of fatigue!

I started things off by adding faux garland and lights to the front of the house.  After five years, I have sort of mastered how things can go up and come down easily.  I replaced lights in the greenery last year.  So, I was looking forward to a quick placement and moving on.

In the tub where I store the greenery and lights, I also added the pieces of white nylon twine that I used for attaching last year.  So, this made things go much, much faster.  As you look at the porch, I swag the greenery with lights entwined from the right side as shown in the photo above to the left and down the hand rail.  Then, I attach the other side in the same way.  Last, I stake the spotlights right out from the porch corners and run extension cords to connect everything to a timer which is plugged in next to the front door.  Easy, peasy! 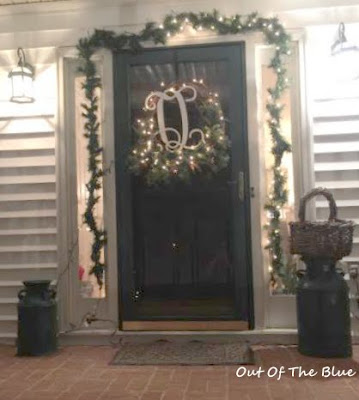 This year I added lights to the wreath on the front door and wired the swirly monogram to it as well.  I placed a basket of scented pine cones atop one of the milk cans by the front door and called myself finished.  I guess the delivery guys enjoyed the scents of the season because I think they were the only ones who graced our front porch.

Next, I always tackle the mantel.  We have personalized needlepoint and velvet stockings for every member of our family.  So, that is plenty decorative for our den mantel. 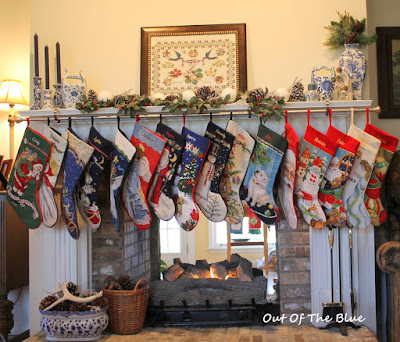 Each is different and they are each beautiful I think.  I have some metal stocking holders that curve around the edge of the mantel.  I slide a metal curtain rod through the loop that goes under the mantel and then slip each stocking onto the curtain rod.  It is sturdy and holds them all well even when they are stuffed full. 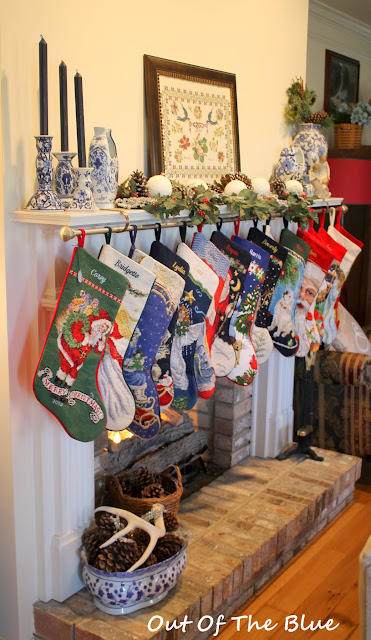 This year when I was pulling tubs and boxes off the shelves in the basement to bring upstairs for decorating, a bag fell off and landed on my foot.  It was the glittery foam balls and pine cones that my daughter-in-law had used to decorate our mantel when Mike and I married. 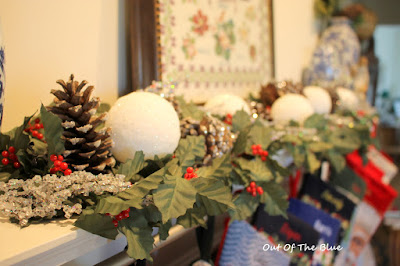 So, these were mingled with some silk holly garland pieces and laid right on top of the mantel.  There are glittery sprigs, pine cones, and foam balls which look like snowballs glistening there and bringing cheer each time I glance that way. 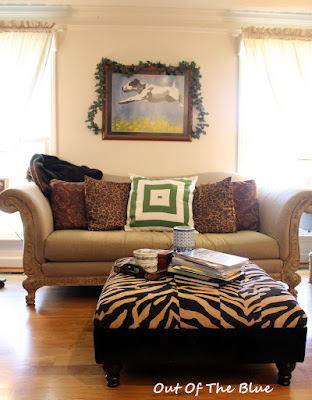 I draped a few swags of the silk holly across other places in the den to make it more festive as well.  The dog painting above the sofa got a swag of holly and there was the addition of the green striped pillow as well.  The coffee table vignette was simple since I knew grandchildren would be climbing and playing.  I simply added a Mikasa china Christmas dish that was my Granny's to the tray on the ottoman. 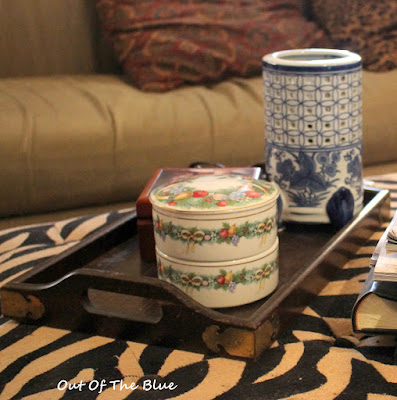 It was a combination of two dishes since one of the lids was broken during moving and I simply stacked two like dishes there and used the unbroken top to make it be more of a stacked china dish.  It really looks as if it was made for that. 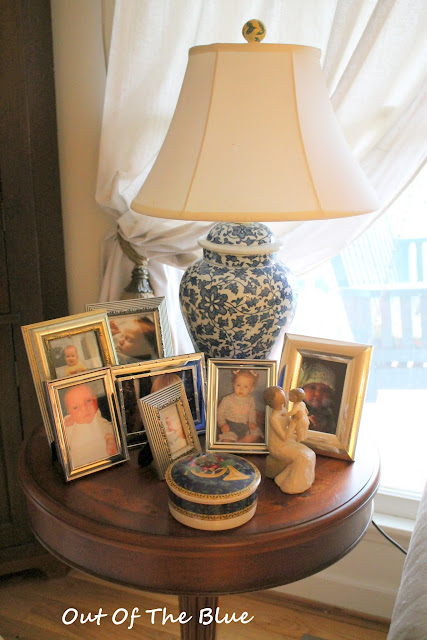 Another of the inherited china dishes was added to the end table between the sofa and chair.  It is probably my favorite as it features a beautiful blue background, a French horn, and holly.  I loved each of them from first sight. 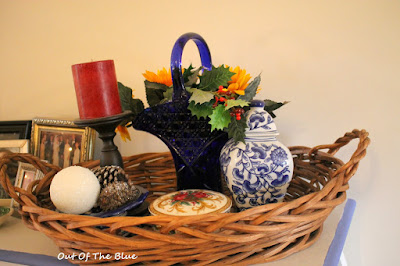 The third dish was added to a vignette on the entry table.  In this basket a sparkling ball and pine cones were added to a blue and white pedestal dish and a sprig of holly was added to the cobalt blue glass basket. 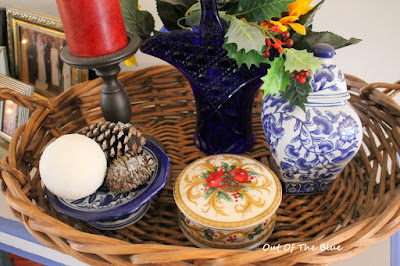 My Granny kept the dishes out year-round as decoration on the shelves of her office. I sort of like packing them away and bringing them out seasonally to showcase some of her beautiful things from time to time. 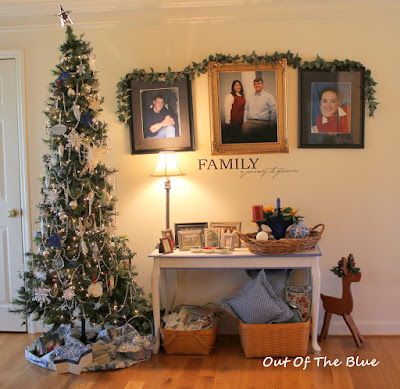 We put the tree on this end of the den for a change.  In addition to the basket update, I added a swag of silk holly to the tops of the children's portraits.  The tree looks much like it has for years.  I bought it years ago during a day after Christmas sale.  It shows my love of blue, white, and silvery baubles.  The silver beaded garland and a few simple blue and white decorations were purchased along with the tree.  The other ornaments have been added over time. 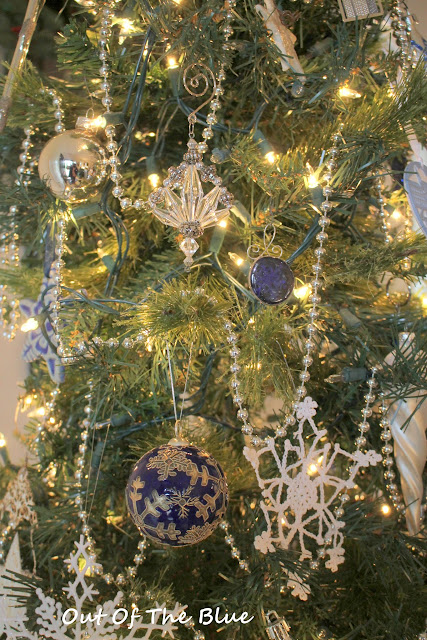 There are simple crochet snowflakes alongside enameled snowflake ornaments and small painted glass disks entwined with silver scrolls of wire. 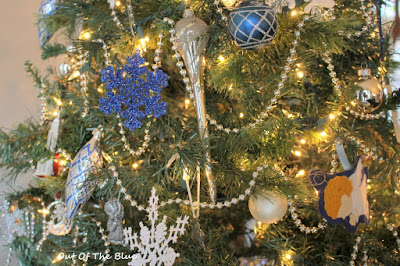 There are glittery clearance ornaments along with an embroidered felt angel that I stitched the year I was pregnant with Bridgette. 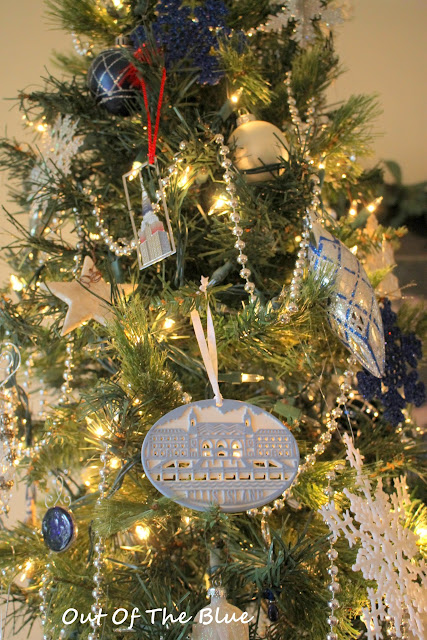 I thought of my dear friend, Rhonda, and our trip to the Empire State Building and Ellis Island and chuckled at our trip through China Town on our visit to New York when we attended an educational conference together. 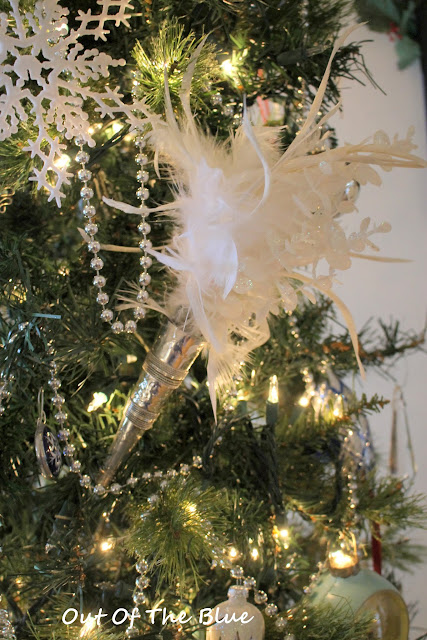 This silver cone vase was a found treasure during a 'junking day' one year.  I love stuffing it with feathers and a sprig of glittered eucalyptus.  It is showy and prissy. 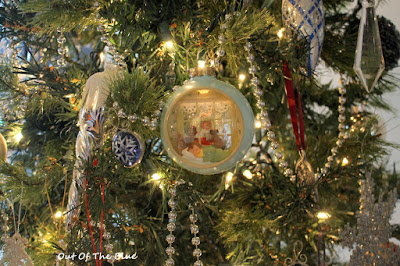 This Hallmark ornament with Santa shushing and peeking in the window at a sleeping child is always a favorite memory for my children from their toddler days.  It hangs alongside inexpensive plastic glittered stars, a German-glass-glittered icicle ornament, and some Longaberger pewter ornaments. 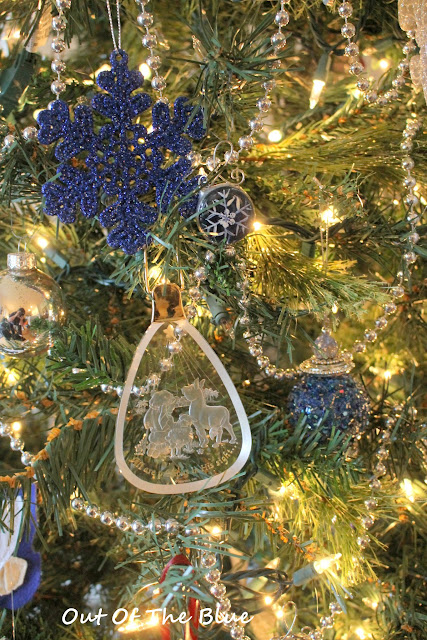 This simple acrylic manger scene with a star sparkling down from the lights is also a favorite from the children's childhood.  It hangs alongside another junking treasure, a glass-beaded ornament with attached prisms that sparkle. 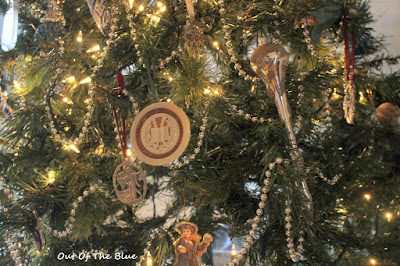 Other metallic finishes are also mingled in with the silver German-glass-glittered ornaments and pewter Longaberger angels and snowflakes.  The center round ornament is from the Library of Congress and has a piece of copper in it which came from the original roofing material. 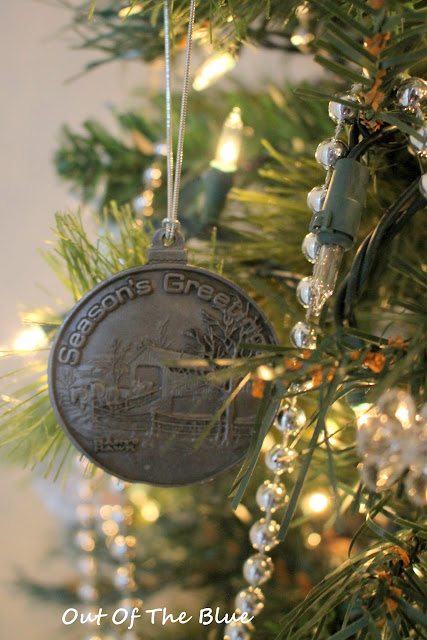 The pewter ornament with a covered bridge scene was given to Mike by the company where he worked for most of his life. 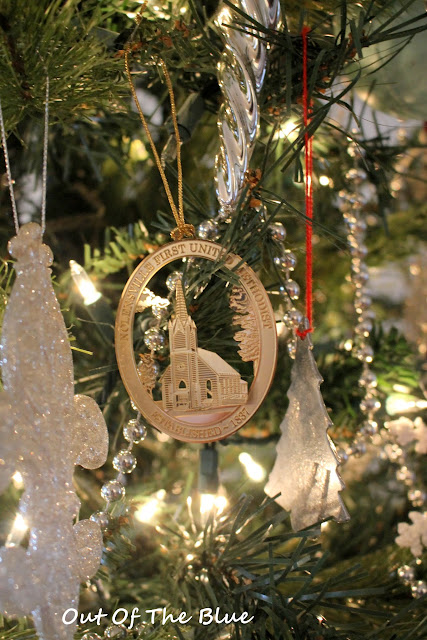 This pretty brass ornament features the local Methodist church where Mike attended growing up.  It is surrounded by a glittery Fleur-de-lys and a pewter Christmas tree ornament. 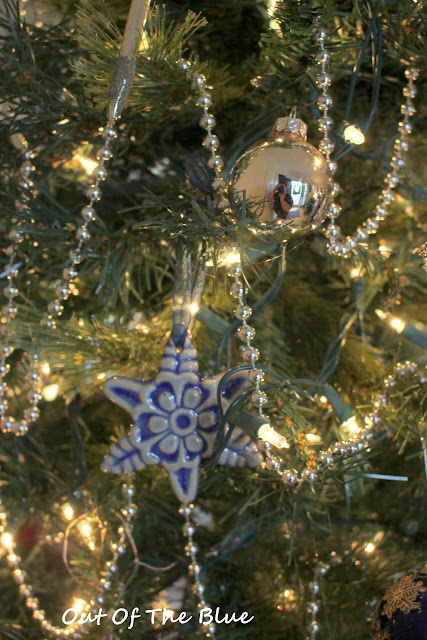 The first Christmas Mike and I were married, I did a bit of local shopping and attended the local Presbyterian Christmas Bazaar.  I was excited to find three beautiful porcelain ornaments.  One was this blue-and-white star/snowflake ornament. 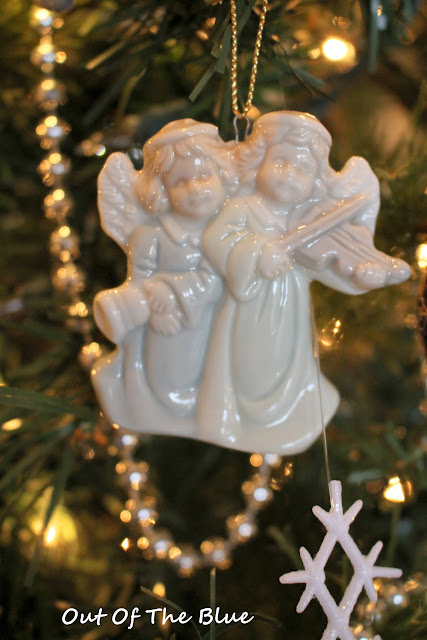 The other two are pale glazed blue and white.  One has two little angels and the other has two Victorian dressed children. 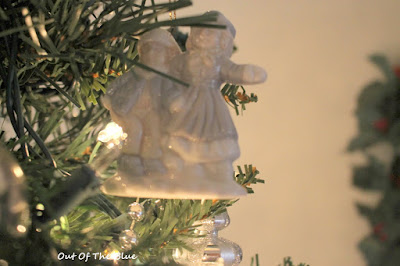 I like to think these represent a blending of our families.  His two children as well as mine. 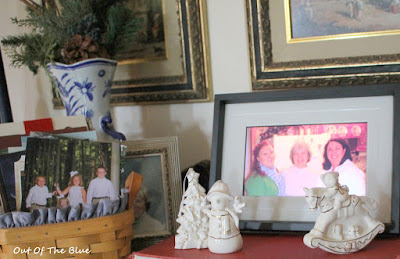 Mike only had a small box of white ornaments when we married.  This year, I set them up as little vignettes throughout the house.  This one sits beside a basket holding our Christmas cards, a blue-and-white vase with some greenery and pine cones, and some framed family photos.  It has a beautiful little Christmas tree, a snowman, and a Teddy bear riding a rocking horse.

As I started this post, I thought I'd kept things pretty simple this year.  However, I find that even with the simple things, we have much to enjoy and many blessings.  I'll follow up this post with other Christmas tours of the house. 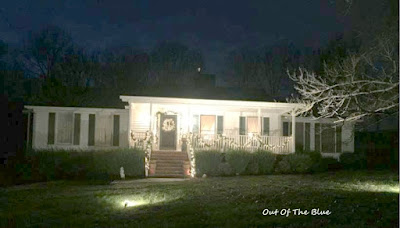