Adding a Little Fall in the Kitchen

I try to refresh the rooms where we spend the most time by changing out some little pieces that give a nod to the season.  Even though it hasn't felt like fall in Tennessee, yet, I decided to add a little of the season to our kitchen anyway.  The places I always start with are the table centerpiece and the mantel. 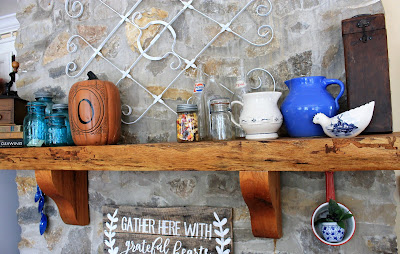 The blue jars on the mantel got a good wash and I added a couple that had been hanging out in the basement kitchen.  They both are commemorative jars created to remember America's Bicentennial in 1976.  They were my Granny's and the quart one has a little card inside that tells the story of their origin.  Behind those are the three antiques with zinc tops that have been setting there for years.  The quart one was mine and Mike had the other two when we married.  To the left of the jars, I added some antique school books that were Daddy's and atop them is a coffee grinder that was Mike's maternal grandmother's.  Inside the drawer of it are several matchbooks.  We don't know if they are there because it was her storage place for matches or if she was collecting them.  But, when I give it a seasonal clean, I just return them to the drawer and smile.  I added a ceramic monogrammed pumpkin that Bridgette gave me the first year after Mike and I married.  On the right side is an antique pint Atlas jar with zinc lid that came from Mom, a little antique glass-top jar, an old milk bottle Mike had, and a couple of large Pepsi bottles from the days when Daddy kept one setting at the end of the milk tank for refreshment.  The cream pitcher is a Longaberger one I had and the blue crock pitcher Mike's mother gave us.  She said it was used by Mike's grandmother to keep the milk in.  The blue and white bird planter came from my Granny and the little enamel pot holding a blue and white pot with greenery below it came from Mikes grandmother.  I always seem to notice the yellow tinge in some of the stones of the fireplace more in the fall maybe because I add warm tones to the mantel.  That was the inspiration for my painting the kitchen the warm, buttery yellow. 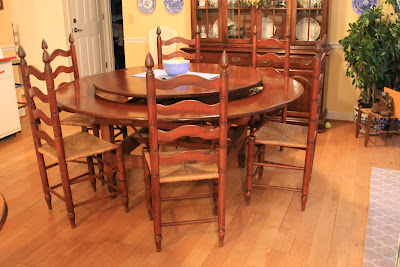 Mike's mother gave him this antique dining table and ladderback chairs that were handed down from his paternal grandparents.  The table is a piece he has always loved and was excited to put in our home.  It is a beautiful piece and the grandchildren especially like the lazy susan aspect of it.  We had a rectangular table here.  I have several long table runners that I had used on the old table.  So, when I started adding fall to the kitchen, I went to the closet for one of them.  The ones I made several years ago with orange in them were both long enough to drape across the old table and hang down the sides a bit.  I quickly realized that wasn't a look that would work with this table.  So, I made do. 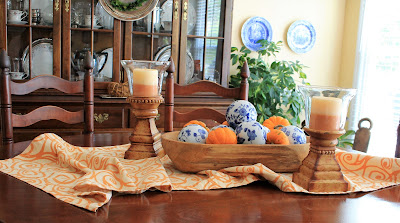 I just did a little artful scrunching and let it be.  Later, I might spend a little time revamping some of the table runners I made and making them into placemats or shorter runners but for now, a scrunch is OK.  I topped the runner with some Southern Living candle holders that I bought years ago and added a few orange baby boo pumpkins to the pretty blue and white balls Bonnie gave me that had been her mother's.  The pumpkins and balls sit in a dough bowl crafted by my brother-in-law, Dwayne.  The wood for the dough bowl was once a log that served to hold the floor up in the oldest part of the house where I grew up. 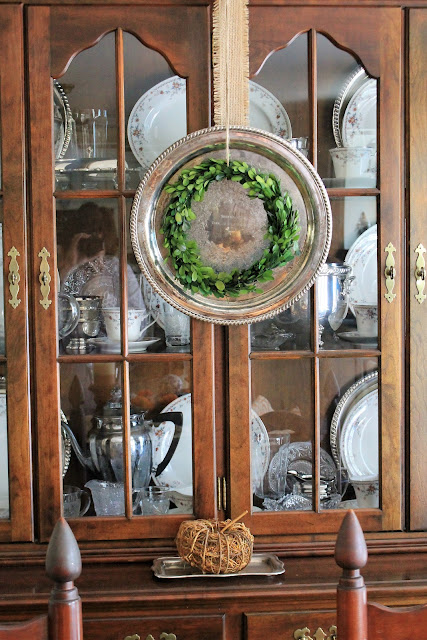 I added a twig pumpkin to the little silver tray which sets on the china cabinet and it gives a rustic feel and some texture to the glitz of the silver and china stored there. 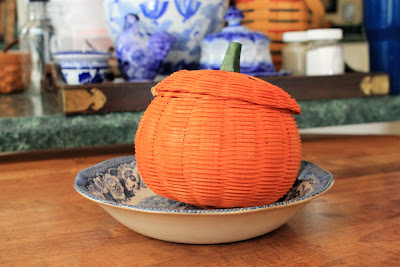 The last little nod to fall is a little wicker pumpkin that I set inside an antique blue transferware bowl that Mike's mother gave me.  This serves as the simple centerpiece for the little drop-leaf table where Mike and I eat most of our meals.

For now, these little refreshes have perked up our spirits and made us feel like fall at least while we are inside the air-conditioned house.  Outside the temperatures are still in the high eighties and nineties and it sort of takes our breath when we step out the door.  I'm sure I will be wishing for these days when it is freezing this winter but right now, I'd love to have a little bit of fall showing up on the thermometer outside!