Earlier this year Mike's mother sold her house and moved into our basement.  We had to do a major clean out and get rid of things.  The two-bedroom apartment with a full kitchen and den was fully furnished and we had loads of stuff in the storage room as well.  Since she was down-sizing, we were the recipients of a few items that we made room for upstairs as well.

Then, my mother married and moved into a new house and combed through her belongings, giving away items to us as well.  So, all summer I have done some shuffling and moving and redecorating to find space and the just-right place for those items that have joined our household.  So, as I share how I've added a bit of fall, I will also share some of the shuffling and changing that has taken place. 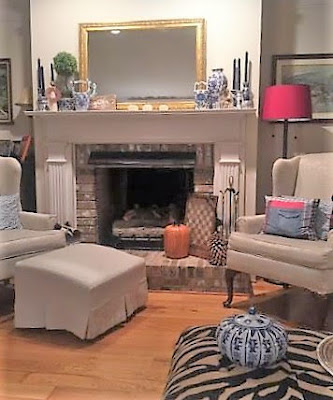 Above is my view as I lounge on the couch.  I shifted the two wingback chairs so that they flank the fireplace.  They were rescued from the dumpster by a friend almost twenty years ago.  My parents had them recovered for me as my Christmas gift in 2007 and Bryan repaired one of them back in the spring.  The ottoman between them is a yard sale purchase that I slip-covered with a companion fabric that I'd bought at the same time I bought the fabric to cover the chairs.  The floor lamp behind the chair on the right is a second-hand project that still makes me smile when I think about how it changed with a little DIY.  The mirror is one I got second-hand for thirty dollars.  I felt like the mantel needed just a little sparkle and I like how it bounces sunlight back into the room in the morning from the windows that are on the opposite wall and at night bounces it back from the can lights in front of the fireplace. 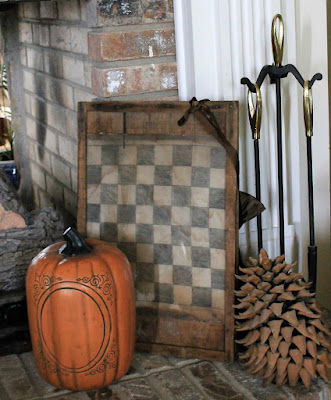 To the hearth, I added a ceramic pumpkin that came from the clearance aisle at Hobby Lobby a few years back.  It was set in front of a checkerboard that came from Mike's mother.  I set a giant pinecone that came from my mother's to make a trio of items on that bring the look of fall to the right side of the hearth. 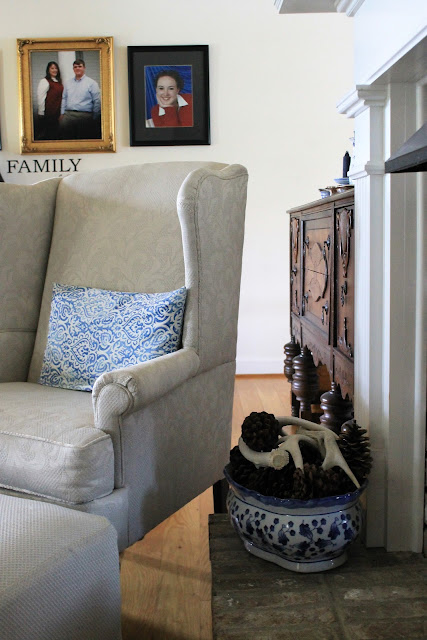 On the left side of the hearth is a blue and white pot full of small pinecones and I just added three natural shed deer antlers found here on the farm to it. 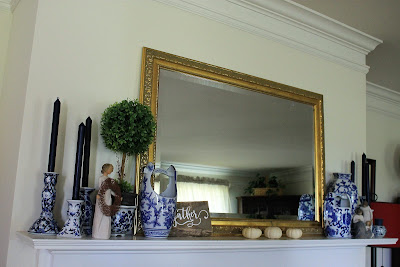 I added three baby boo white pumpkins to the mantel.

I love how the gilding of the mirror and the reflection of the light gives them a little glow! 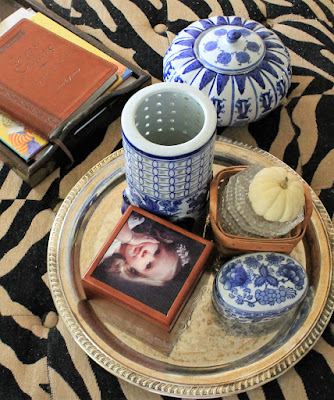 The first photo showed a glimpse of the ottoman we use as a coffee table.  I added a blue and white pumpkin that I picked up about twenty years ago at a thrift shop.  It joins a thrift store wooden tray that corrals some books and the TV remote that has been on the ottoman for a couple of years.  I used a silver tray that Mom gave me which was a trophy we won exhibiting cows at a fair about thirty years ago.  I use it to corral a blue and white lantern, a box Lillie gave me for Mother's Day when she was about two or three, a blue and white box, and a basket holding cut glass coasters and another baby boo pumpkin.

There are a few other touches of fall added into the den but I will share them in another post later.  Surely mother nature will add a bit of fall soon.  It is still in the low nineties here and we are sweltering!