Have you seen or tried any of these virtual reality apps and sites?  Last week our instructional technology team led a professional development that was all about virtual reality.  My part was to share a couple of apps and provide time to interact with a Google Cardboard.  The Cardboard is a lot of fun and does give the sensation of actually being there in a lot of ways.  I dropped Mike down in a photosphere a few miles from our house and he kind of panicked because he was right in the middle of a state highway and feared he was going to get run over by a vehicle!  The roller coaster was a little too realistic for me and I could have gotten a bit woozy if I hadn't stopped after a big old dip.

One of the gals was sharing an app that goes along with the Guinness Book of World Records.  We could stand next to the tallest man who lived; it was like having a virtual visit from him.  Below is how I would look standing next to him.  I barely reached his waist! 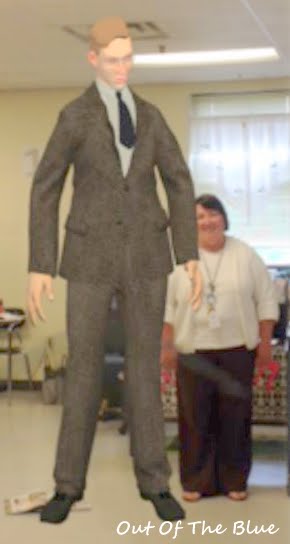 You can see that he looks like he is standing on a book.  That is the Guinness book.  There is a trigger on the page that tells about the tallest man on record.  The app will project an image and then a photo can be made of a person standing next to him.  Below is what it looked like from my perspective. 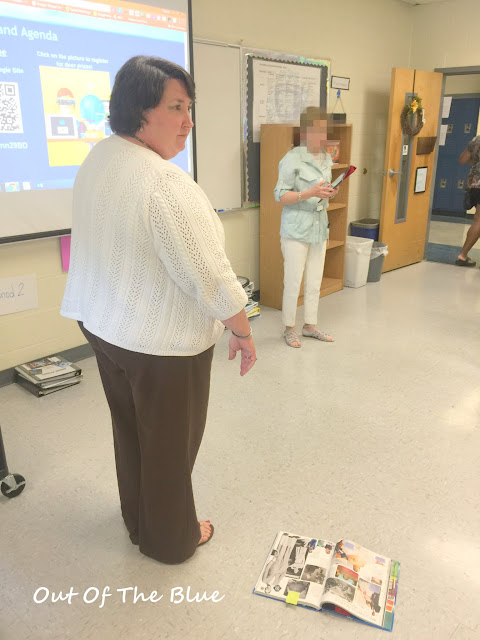 The girl making the photo with a tablet was standing in the doorway of the classroom that can be seen.  It was a bit of fun to get the morning started.  We had stations for participants.  They could create lessons using VR apps or online sites.  They could use a 360 app to create their own photospheres using a phone or tablet.  They could take virtual field trips using available photospheres.  It truly was a chance for folks to experience something in a classroom that many students might never be able to visit in reality.  Our district was fortunate enough to participate in Google's Expedition testing this past spring and we are looking forward to using that in our classrooms in the fall.  Exciting learning opportunities which also bring in an element of fun!
Posted by Beverly Noland Ozburn at 10:29 AM