We got a downpour!  At about one o'clock this afternoon I went out to do a little grass mowing because the weather gurus were predicting rain for late afternoon and I thought I could help the hubby out a little.

I got most of our yard cut and decided to cut along the fence line going down the driveway.  The sky started sprinkling a little bit on me but I thought I would continue and come back up on the other side of the fence before I stopped mowing.

Well, by the time I got back up to our house, the rain had stopped.  So, I decided to mow another little area across the driveway where the guys park their trailers and to mow the drainage ditch in case the rain did come and was too wet for Mike to mow.  Again, the sprinkles dripped down but stopped and I got another little segment of grass cut.  Then, all of a sudden, the rain began to really fall!

I went to the barn with haste and parked the mower.  Then, trotted pretty quickly to the house.  Toby, who had been waiting on the porch, and I scurried into the house but not before we were pretty drenched.  So, I just shucked out of my swimsuit and jumped into the shower.  When I stepped out of the shower, I glanced out the window and was amazed at the sight.  So, I pulled one of Mike's shirts on and went out with my trusty little camera. 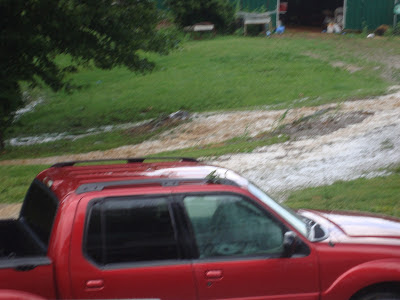 This view of water rolling down the driveway between Stephen and Bonnie's house and our barn! 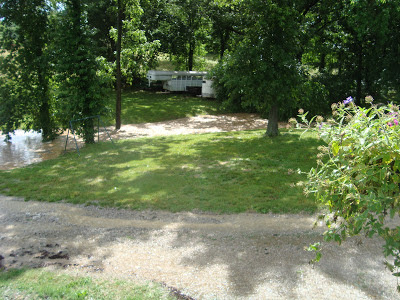 Just southeast and downhill of the previous spot, the drainage ditch in which I had just finished mowing grass! 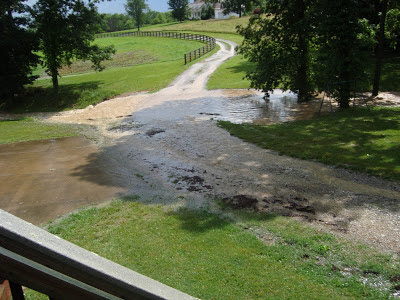 Continuing on southeast and looking toward my mother-in-law's house, you can see the water running down the driveway and overflowing the drainage ditch across our driveway traveling on toward the creek which runs in front of our house. 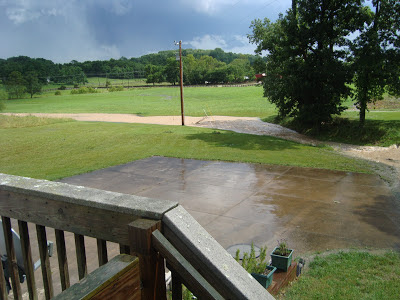 Looking due south off my deck in an area that I had been riding the mower over less than forty-five minutes before.  The water would have been washing me away if I was there now! 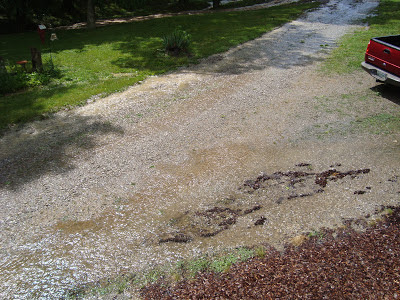 Our driveway looks like a creek bed with water steadily running down it! 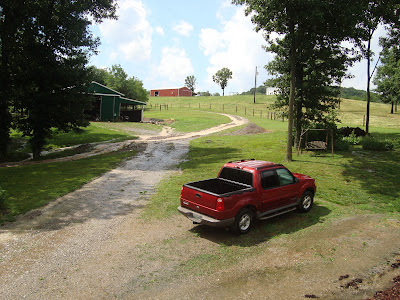 Lots of water coming down that hill!

I sent those pictures off to Mike and Stephen and Bonnie to let them know what things looked like while they were at work.  Then, I got a call from Stephen telling me that I needed to go out and take a look around to assess the storm damage.  So... 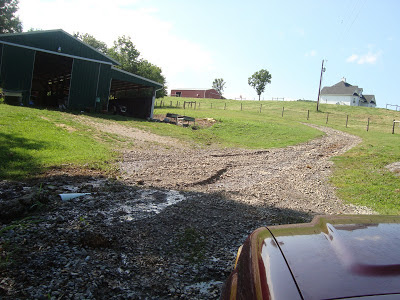 Off I trekked to begin my assessment.  LOTS of the rocks from the driveway were washed out and huge gullies were left behind in the driveway that connects our two houses! 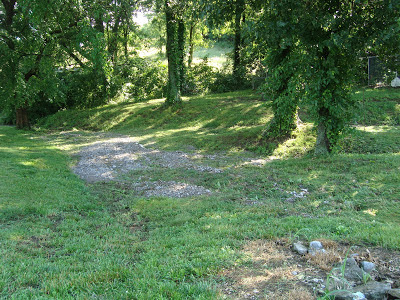 The drainage ditch I had just mowed caught some of the gravel.  Isn't it hard to believe that in less than thirty minutes that much water can rush down and turn this area into a rolling rapids?  Then, about thirty minutes later it looks calm and serene! 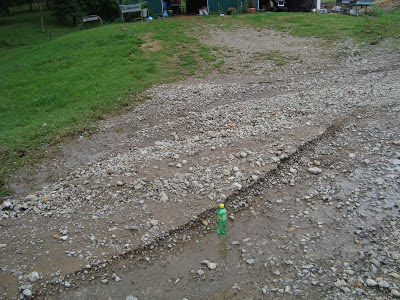 I set the soft drink bottle into one of the gullies to give a little perspective of how deeply the water had cut into the ground after the rock was washed away. 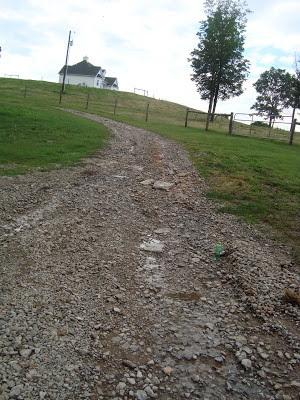 I headed on up the hill to drive the loop around and see if this was the worst of the washout.  Again, see the soft drink bottle about half-way up and to the right there in the photo.  This was a bigger gully. 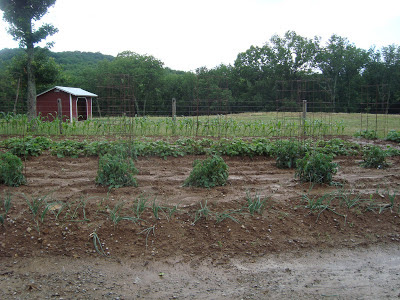 If you look really it closely at Stephen and Bonnie's garden, you can see how the corn is leaning toward the east... 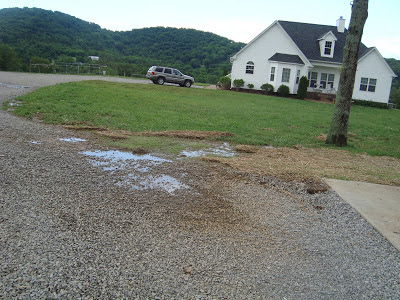 An almost flat spot atop the hill shows that even there was some water damage where the straw off Stephen's newly seeded grass was washed.

Heading down the hill on the opposite side of Stephen and Bonnie's house and you can see that their driveway is gully-washed here, too. 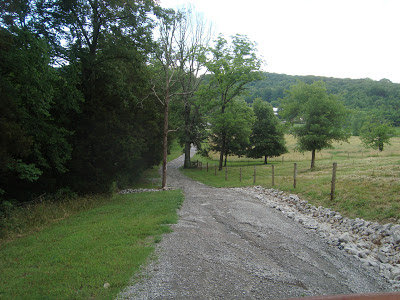 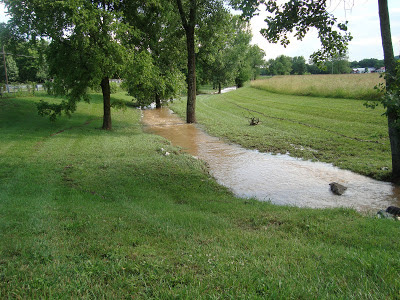 Looking down the creek, you can see the 'stick-line' where the water was out of banks and on the right side of the creek there are a couple of limbs that were washed down. 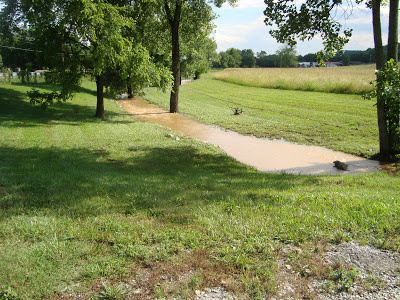 Another view of the creek...

I pulled out onto the highway and turned in to the southern entrance to our compound to head back up the hill toward home.  Here is the view heading up the driveway toward my mother-in-law's home.  Look closely into the middle of the photo and you can see my soft-drink bottle setting down into that gully. 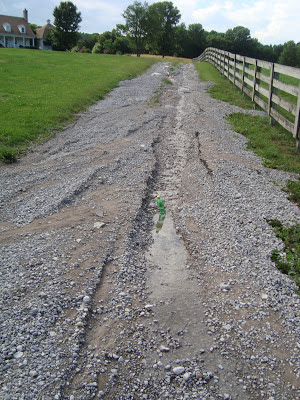 The deepest gully of all was washed here and I was glad to be driving a truck or I would have drug the bottom of my vehicle when I drove up the driveway toward home. 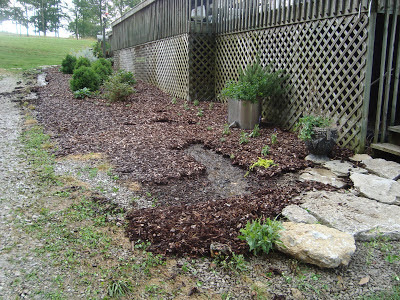 We had a major mulch washout!  This is a view of the flowerbed that I picked and poked at just this morning! 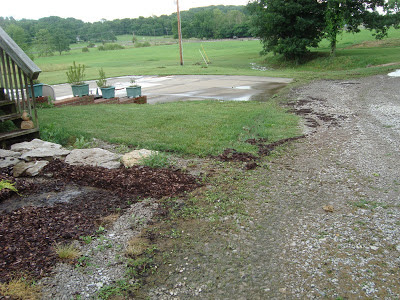 This shot shows where some of the mulch wound up when that water was rolling down the hill. 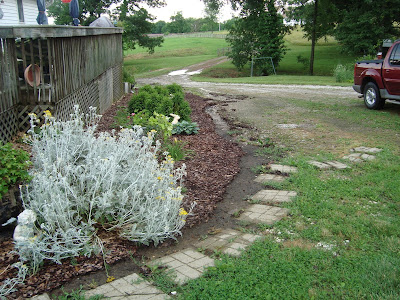 This picture shows the water trail that sweeps just past the stepping stones and around the flower bed just off our back porch.  That is a lot of water force!

As I am composing this post, I have the television on where the weather reporters are showing photos and video of tornadoes which swept through southern Kentucky.  Bless them and I hope folks weathered the storms safely!