Yep, you read it correctly.

My Mama is pumpin' iron!

I just learned about it yesterday and I am not in the least bit surprised.  After all, this is the woman who raised me.  The woman who used to milk cows and rake hay and cut tobacco and haul silage and drag furniture out of a burning house and shoot buzzards and threaten-me-to-within-an-inch-of-my-life...

So, why would anybody be surprised that this woman is pumpin' iron? 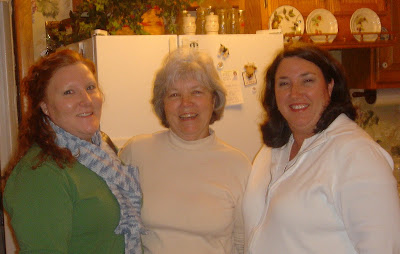 (The photo above is one where she had just threatened my sister and me
and forced us to stand beside her in a pose for the camera and smile.
Can't you see all that?)

See, this is really how the conversation came about.  I stumbled across astutely discovered a bargain at our local Goodwill the other day that was something he needed - a cell phone clip.  (Why he needed it is a story for another day.)  So, he asked me why I was in the Goodwill in the first place.  (He's not so fond of my Goodwill treasure hunting but that is a story for another day.)  So, I just explained that my Mama mentioned that she needed some dumb-bells.

I couldn't even continue with my explanation.  When I said that, he gave me the most incredulous, shocked look and kind of went into a rant.  "What in the WORLD does your mother need dumb-bells for?  She has suffered with knee trouble, had knee surgery.  Then, suffered with hip/back trouble, had back surgery.  Recently suffered with hip trouble on her other side and has been undergoing physical therapy and steroid treatments.  Why on EARTH would she need dumb-bells?"  And then he grunted that exasperated grunt.

So, after a brief pause to let him catch his breath and recompose himself to a state of listening, I proceeded to explain that she had been using these dumb-bells in her therapy and mentioned that she needed to get her some weights to continue her work-outs at home.  Since I was going to be right across the street at the Walgreen's getting medication for our old, decrepit bodies, I volunteered to look for her some weights and that is how I came to be in the local Goodwill.

It was my lucky day!  First, I found these cute little weights: 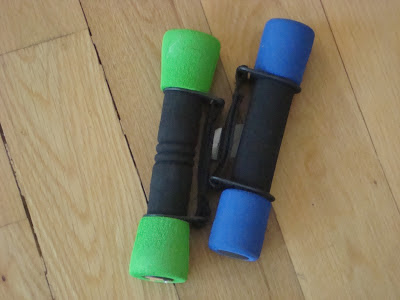 (No, those specks around them are not dirt on my floor.
I am a tidy housekeeper and would never have dirt and such on my floors!
Well, maybe just a little speck or two...)

They were ninety-nine cents each and went into my cart.  The thing is, Mama had said she needs three-pound weights and these didn't have any designation to tell me how heavy they were.  Since I am not experienced with pumpin' iron, I couldn't really heft them around and determine how heavy they were.  So, I kept digging and looking.  Then, I found this pair of weights: 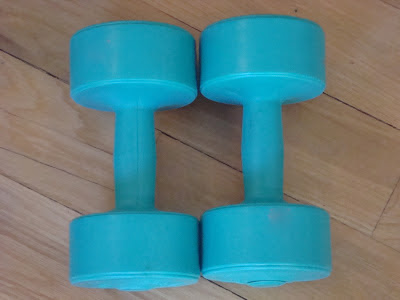 I didn't have my reading glasses with me.  So, I couldn't see what the little inscription on the side said and didn't know if it was a three or a five or an eight and there was no young whipper-snapper lolling around to read that for me.  So, they went into the cart and I kept digging and looking.  Then, I found this pair of weights: 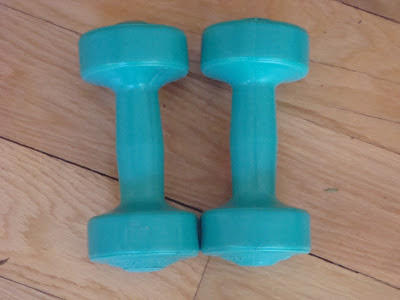 So, I came home with three sets of dumb-bells for my Mama and spent only about $15 which is less than half what they would be at retail price.  Score!  (That is supposed to be a metaphor but do you score in pumpin' iron?  Maybe not.  It was a score at getting a bargain, though!) 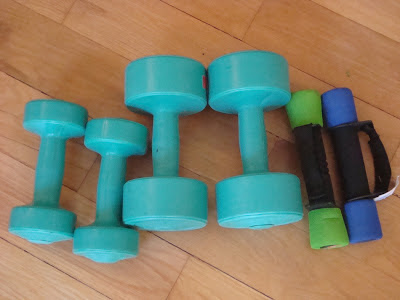 When I got to my glasses, I learned that I had come home with a pair of three-pound weights (on the far left), a pair of eight-pound weights (in the middle) and who knows what those cute ones on the right weigh but I think they are two or three pounds.

Mike was still shaking his head at the thought of my Mama pumpin' iron and mentioned that Mama had only expressed a need for three-pound weights and wondered what I was going to do with the others.  I suggested that she might begin training the two of us in pumpin' iron and he could use those manly eight-pounders and got another one of those incredulous, shocked looks and a grunt.  I can see that happening, though, can't you see her doing that? 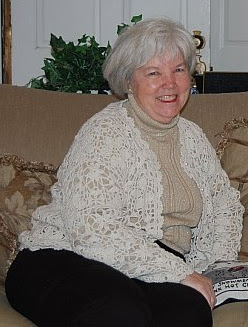 (Doesn't this look like a woman who is one of those hard-pushing trainers?)

For some reason, Mike didn't seem to think that would be happening.  Then, I suggested that perhaps Mama would work up to the eight-pound weights as her therapy progressed.  After all, she had already advanced from two-and-a-half-pound weights to three-pound weights

At that I got a true guffaw!  After he had wiped the tears and caught his breath from laughing so hard, Mike informed me, "If your Mama moves up to working out with a pair of eight-pound weights, she might get mad at your Daddy and whip his butt!"

(Only he didn't say butt.  The word he used begins with an A.)

Iron-Pumpin' Machine that she is...
Posted by Beverly Noland Ozburn at 7:00 AM