Days for the Grands - Lillie's

This is Lillie's week of Days.  She is cashing in her Christmas gift from her other grandparents and us - riding lessons. 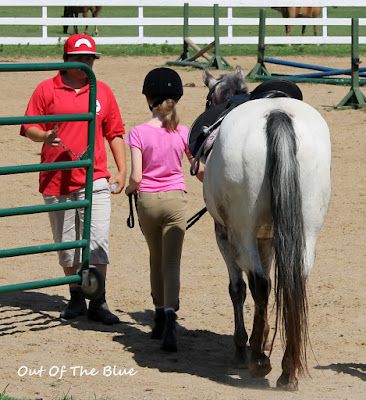 She seems to feel like she is as near to heaven as she can get when she is there with a horse. 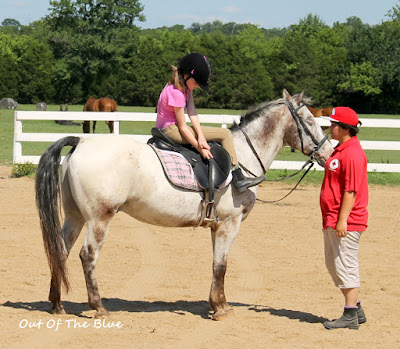 The young woman working with her seems patient, knowledgeable, and wonderfully sweet.  Of course, I have no idea what they are doing and simply asked lots of questions when I was uploading photos.  Lillie informed me that she was learning to adjust the stirrups whilst aboard the horse in the photo above. 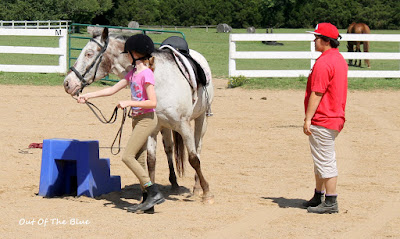 She had just a little bit of trouble getting the horse to lead over to the steps so she could climb aboard.  He didn't seem to want to walk the way Lillie wanted him to in order to have the steps on his left. 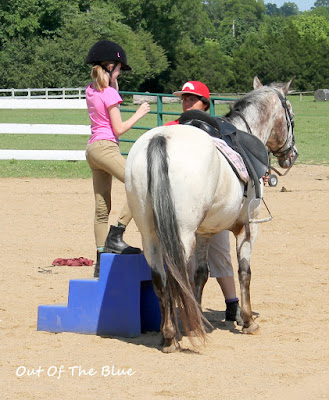 The two of them came to an agreement, though, and riding commenced! 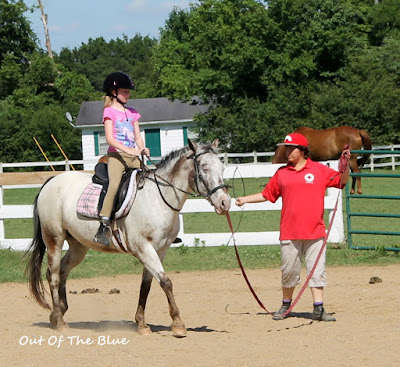 They started off slowly with the teacher doing lots of coaching and leading and spinning a leather covered stick to get the horse warmed up and going as they wanted him to do. 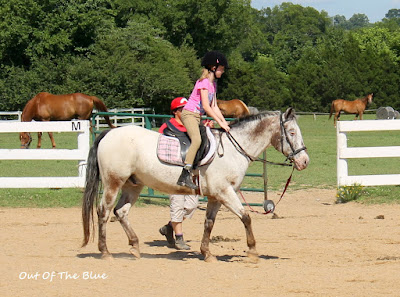 Lillie practiced a couple of seating positions but I have no idea what they were called at this point even though she told me about them more than once on the drive home.  The photo above shows her 'posting,' I think. 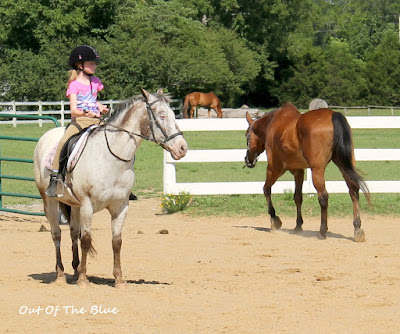 Soon, she was navigating alone and was responsible for keeping the horse going in the direction she desired and tapping him with her legs and holding the reigns to get him going at a proper speed and direction.  It seemed difficult to me but Lillie kept smiling and working with the horse to get him to cooperate. 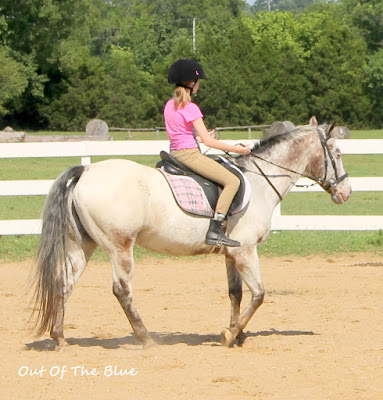 She looks so grown up sitting up there atop that big fellow! 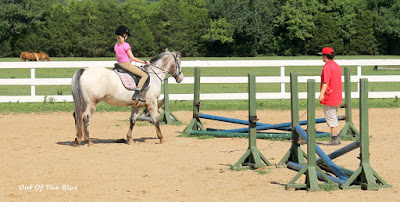 I got rather nervouse when they started circling over near to where those fences were set up.  I guess in my mind I was thinking that big old horse would start galloping along and leap in the air and Lillie might fall off or go flying somewhere.  Thank goodness that was on the agenda at all, though. 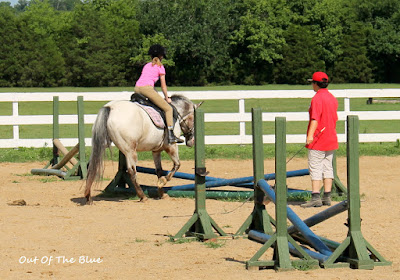 First, they just went near to the fence and looked at it.  Then, they circled around and sort of ambled over it.  Not too far off the ground at all! 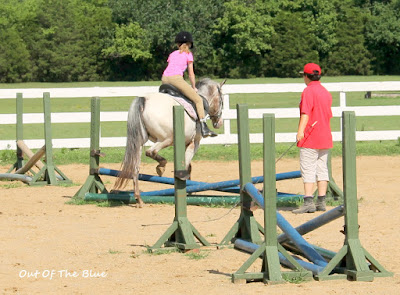 At this point, Lillie was to be in one of the positions she was practicing earlier in the lesson.  I hope she was in that position!  I certainly don't know one way or another but she went across the fence with no incident and I was relieved! 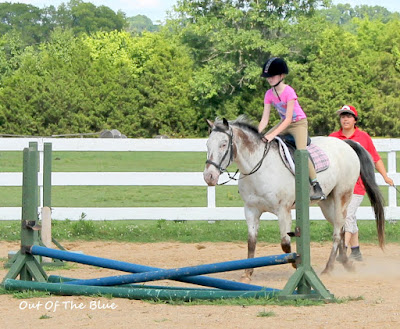 After going in that direction a couple of times, it was time to turn around and go in a circle and come across in the other direction. 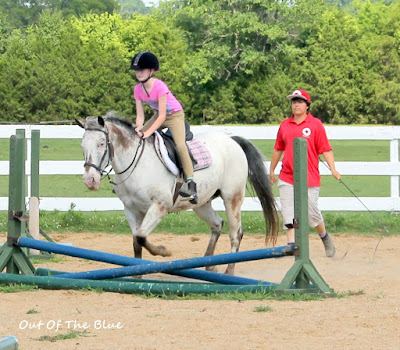 I really hate that this picture does not show a clear look at Lillie's face.  If there is an image of pure joy, there it was! 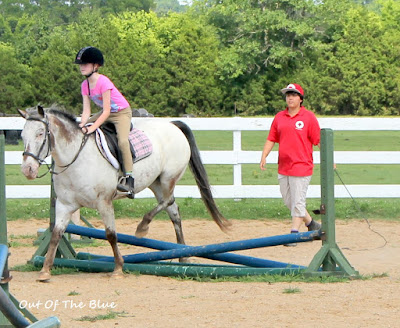 She did that a few times and then tried another fence and made it across successfully. 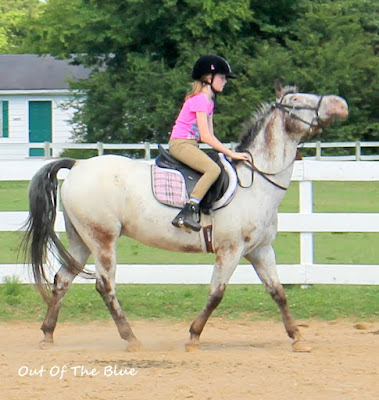 At one point the horse acted as if he didn't want to do exactly as Lillie wanted him to do.  If I hadn't been afraid of the big fellow, I would have jumped into the arena and smacked him on the nose and said to straighten up! 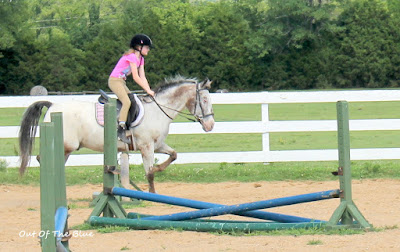 She took it right in stride, though and got him to circle round and go across the new fence a couple of times. 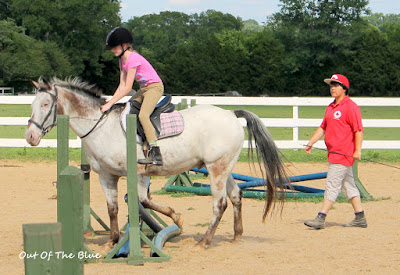 I think that horse was 'giving me the stink-eye' in this photo but at least he was crossing the fence like Lillie was encouraging him to do! 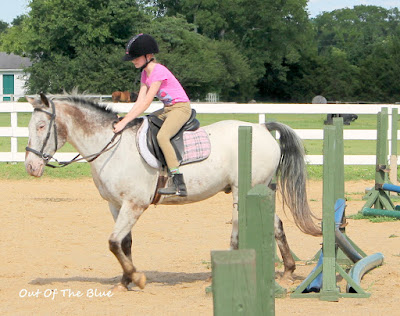 Again, her whole body seemed to be smiling at this point.

Then, it was time to lead the horse back to the stall and remove all the tack and put it away.  Doesn't she look like a little thing hauling that saddle to the tack room? 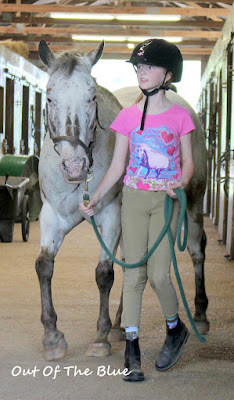 Soon, they came out of the stall and she took him over to the fence and sponged him down. 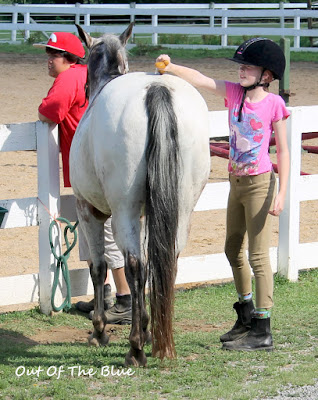 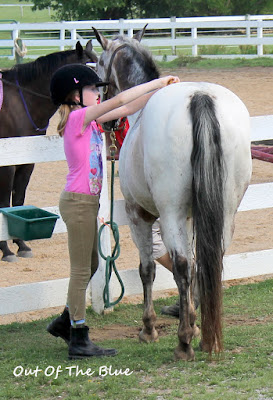 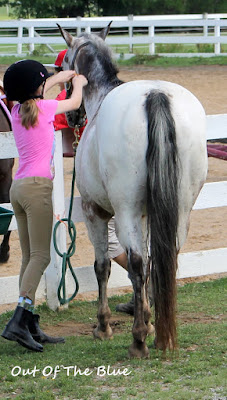 Then, she led him over and opened the gate and unsnapped the lead to let him go out to the pasture for the evening. 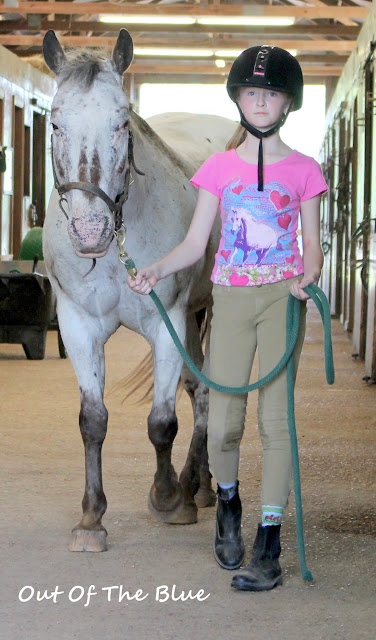 She was a really happy girl!