My brother-in-law, Dwayne, neices, Megan and Madalyn, and Megan's fiancee, Adam trekked the hour drive and got a jump on the fence fixin'.  Mike and I gathered up some extra supplies and made our 20 minute trek to the farm.  Bryan and his family had come for a visit.  So, Bryan joined us a bit later.

Once the team was assembled, we made a collaborative effort to get as much done as possible using the daylight hours.  Dwayne made quick work of some downed trees by cutting them up to get them off the fence.  Megan, Adam, and Madalyn stacked most of the cut pieces in the back of Mike's truck.  Mike began gathering up the broken and rusted pieces of barbed wire.  I picked up the loose branches and made a brush pile.  Even though the temperature was a bit on the cool side, I think we all worked up a sweat.  We were so busy that there were very few photos made. 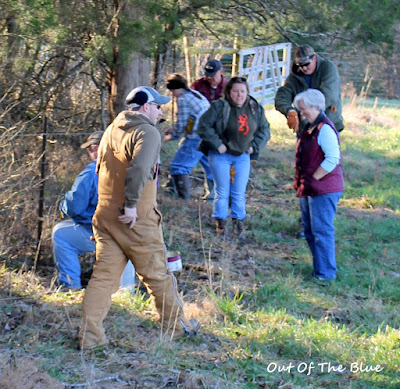 Here is a shot of most of the crew in action with Mamaw checking us out.

Dwayne, Adam, Megan, and Madalyn had one little calf-lot shored up when Mike and I made the scene.  We simply moved down the fence securing it. If there was broken, rusty, dangling wire, we took it up. 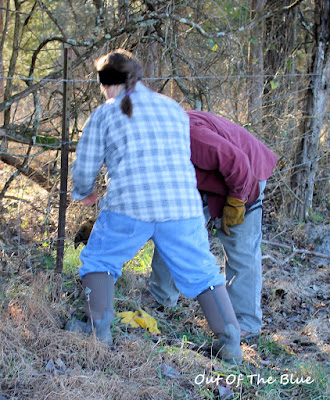 Madalyn and Dwayne securing some strands of wire to a T-post.

Bryan joined us, wearing some of Papaw's coveralls.  Then, he and Adam became the primary post drivers. 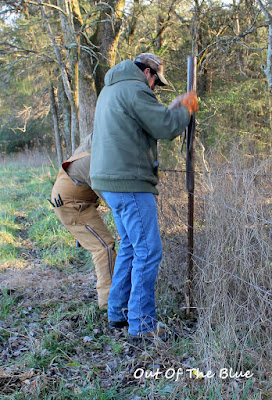 Adam and Bryan teaming up. 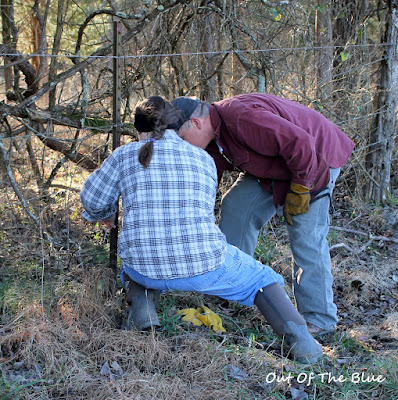 Madalyn and Dwayne teaming up.

Turns were taken to attach the clips securing the barbed wire strands to the posts.  Sometimes an established tree served as a post and the wire was secured with steeples. 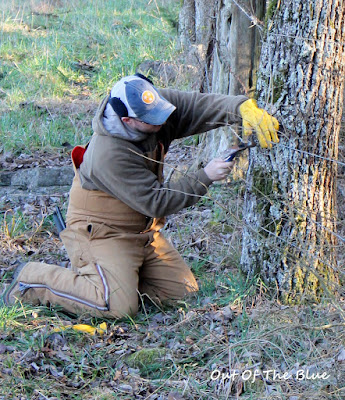 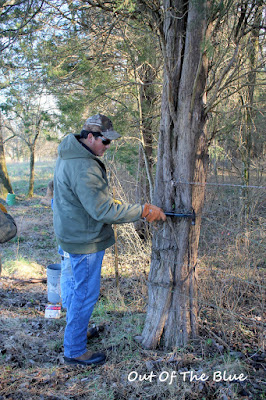 We would work as teams stretching wire from one tree to another and securing it. 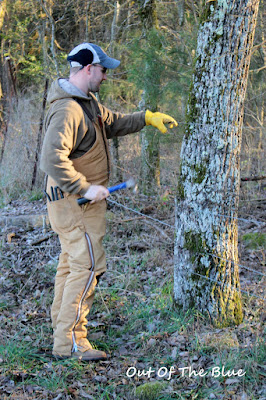 The guys would drive a couple of posts to provide more stability. 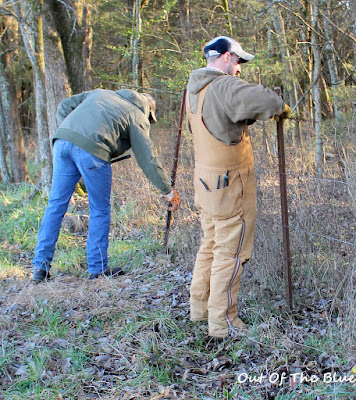 We would add clips and steeples to attach the wire to the posts and trees. 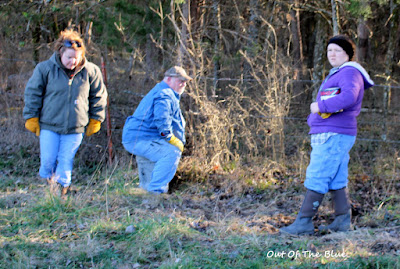 Mike would shift a bucket from tree to post and camp out a minute or two to add clips.  The crew in the photo above shows Madalyn with the can of steeples and fence clips she sorted and made ready to hand to her Uncle Mike to make the process move along smoothly.  Megan was headed to the truck for another metal T-post. 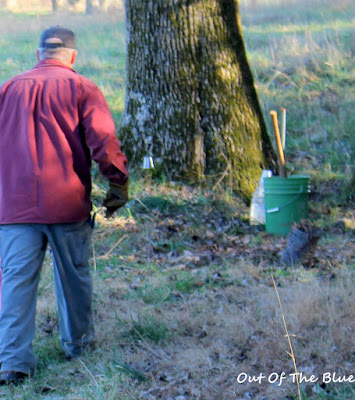 Dwayne heads for the green bucket.

The green bucket served as the anchor for each section of work.  It held the stretcher, steeples, clips, pliers, etc.  We kept the spool of wire for patching nearby and the water jug with cups was stationed there as well.  As we moved down the fence, these all-important items moved along with us. 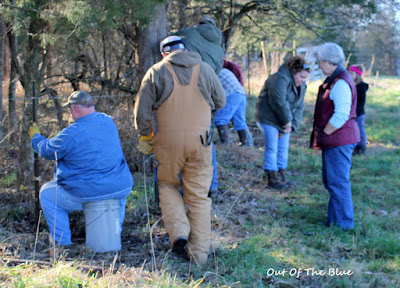 When we were about 2/3 the way through the project, Mamaw, Lillie, Lydia, Jessica, Harris, and his puppy came to check on our progress.  The photo above shows our crew working along the fence-line in full force. 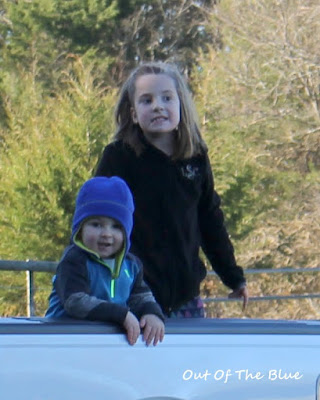 These little fellows brought a ray of sunshine and a smile to all our faces!  They thought they were big stuff in the bed of Papaw's pickup truck, too. 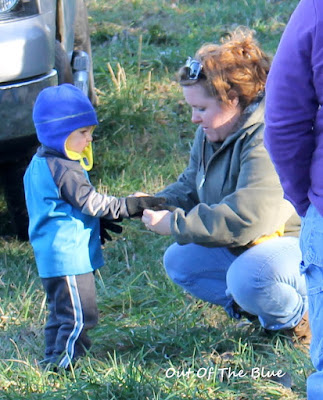 Harris noticed that we all had gloves on and thought he needed some, too.  An extra pair of gloves were slipped on him like a pair of mittens and his little paws were a wee bit warmer. 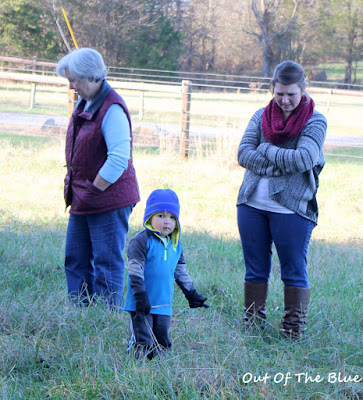 After a few minutes of inspection, they headed off to run an errand. 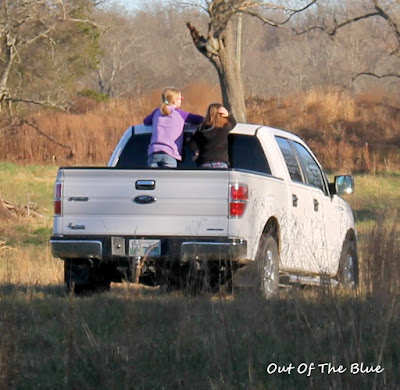 Lillie and Lydia feeling like big stuff riding through the pasture in the bed of the truck. 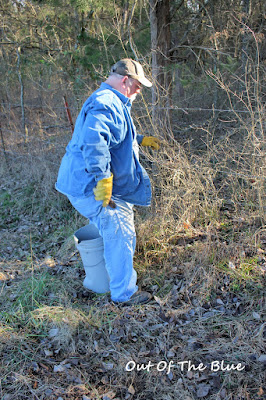 Mike inspecting a couple of strands of wire to decide  if we needed to add or replace some. 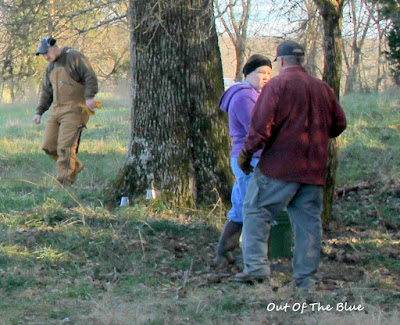 Looks like an important conference going on there on the right! 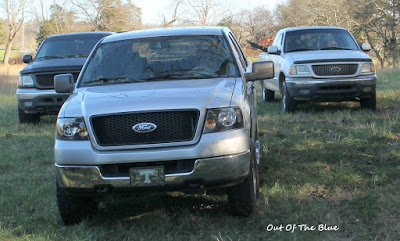 At one point, Adam mentioned that Ford Motor Company would be proud and should be there filming a commercial.  There were these three trucks and then, Papaw's was on the other side of the camera.

This one was piled with extra fence posts, bits of wire, cut wood, and more. 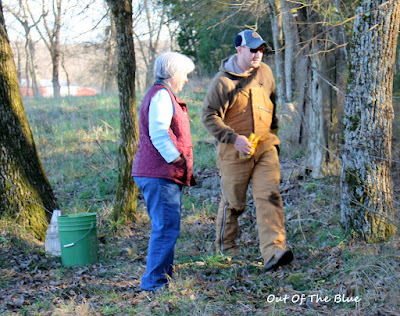 Our work seemed to pass inspection and I feel sure that what we got done was an improvement and will hold calves in the different pastures...at least till the next heavy wind blows through.
Posted by Beverly Noland Ozburn at 12:35 PM