We had a relaxing Saturday.  It was a wee bit damp early on but the clouds cleared a bit and we enjoyed a partly cloudy day.  The greatest part about it all is that we jus suspended most all work and relaxed and enjoyed the day.

I spent the morning reading but Mike loaded up his gear, grabbed a plastic tub of worms, and set off to the waterside for some fishing.  I think he may have enjoyed his morning. 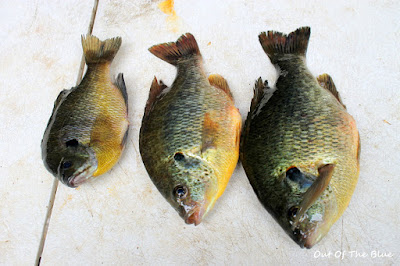 He brought home a cooler with a handful of fish.  One of which surprised him and, frankly, tickled him pink.  Yet, it wasn't just a big fish story. 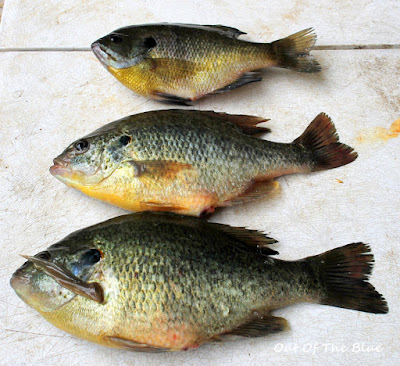 The average fish he usually catches is much more like the two at the top of these photos.  They turn out delicious after he has dredged them through some corn meal and fried them up golden alongside some hush puppies.

Mike enjoys catching each and every fish which is snagged on the line at the end of his pole.  But this big fellow did tickle him a little bit more than the others. 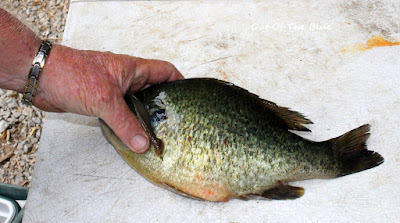 It tickled him enough to show the big fellow off to our son, Stephen.  Stephen's reaction tickled Mike a bit as well.  Mike chuckled as he told me that Stephen had said, "It's a good thing you brought that fish by to show me, Dad, because I would never have believed you if I hadn't seen him!" 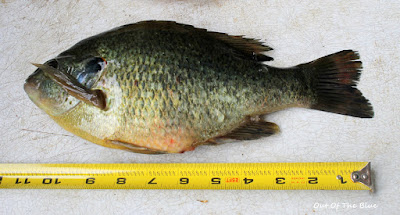 Since Mike couldn't trek all over the place to show off this big fellow - like over to our son, Bryan's, house - he did the next best thing.  He had me grab my camera and he got a measuring tape to do a little big fish bragging!  I'm just thinking he will be tasty with some hush puppies.
Posted by Beverly Noland Ozburn at 12:17 PM